Why Startups Fail | Lessons From 150 Founders 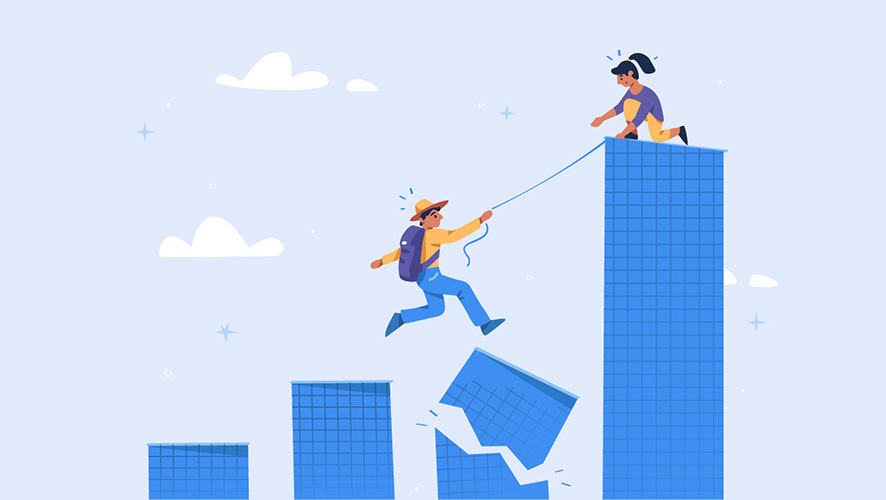 Why do startups fail, and what can founders do to prevent it?

Many entrepreneurs and investors opine on this question, but few offer data-driven answers. Our goal is to identify and share clear learnings on this, and the timing could not be more critical.

In 2020, the U.S. Internal Revenue Service received more than 4.4 million applications for new businesses according to the Bureau of Labor Statistics (BLS).1 In the second, third, and fourth quarters, business formation topped every quarter since 2005. Although COVID-19 has shuttered almost 30% of small businesses, it is simultaneously responsible for the 21st century’s greatest surge in entrepreneurship.2

For would-be founders, there’s no avoiding the undeniable: sustained success is statistically unlikely. Nearly a fifth of new businesses shut down in their first year according to BLS data.3 Even with venture backing, a staggering three-quarters of startups fail according to research by Shikhar Ghosh of Harvard Business School.4 However, fear of failure shouldn’t prevent anyone from starting a business.

One great way to raise the odds of startup success is to learn from current and past entrepreneurs. Towards that end, Wilbur Labs surveyed more than 150 startup founders about the pressures that threatened their businesses. We also pulled records of 350 startup failures from CB Insights and Autopsy then analyzed them for patterns. The resulting insights can help founders improve their odds of success this year and beyond.

When founders solve significant problems and avoid preventable failures, everyone stands to benefit. In that spirit, we’ll examine why startups fail (i.e., shutdown permanently) and how they overcome potential failures.

About 70% of entrepreneurs will face potential business failure based on our survey of more than 150 founders. Nearly 66% will face this potential failure within 25 months of launching their company. Almost 77% of respondents who faced potential failure said it was due — at least in part — to COVID-19.

Based on a novel analysis of data from CB Insights and Autopsy, we identified the reasons that founders cite for failure.5,6 Keep in mind: this is self-reported data.

More than one-third of founders believe that running out of money led to failure. Second to that, founders attribute their failure to a lack of financing or investor interest. In other words, if they managed to generate more revenue, spend less money, and/or raise capital through alternative channels, their startups might have survived.

Running out of money seems related to the third most common reason for failure: no business plan or model. Perhaps founders mistakenly believe that a business plan will slow them down or limit their agility. Or, maybe they expect to exit before there’s pressure to be profitable. Such founders are likely to bank on their next funding round, an acquisition, or a major enterprise deal for survival. If those don’t materialize, there’s no plan B.

Although most startups cannot expect to generate profits immediately, they should have a break-even point and a plan to reach it. As former Google CEO Eric Schmidt often says, “Revenue solves all known problems.” Revenue can also solve unknown problems, as the COVID-19 pandemic has illustrated.

Revenue generation also proves that a startup is solving a significant problem in a sustainable way. If no one will pay for the solution, more financing won’t necessarily change that. There is simply no better measure of product-market fit and competitiveness than revenue.

Based on the data, strong business planning with an eye towards profitability is the surest way to avoid failure. When Wilbur Labs surveyed 150+ founders about their recommendations for preventing failure, they tended to agree:

Nearly 30% of respondents urged founders to do more research prior to launch, while roughly 22% recommended building a stronger business plan. Even though running out of money is the leading cause of failure, relatively few (13.5%) founders recommend financing as a way to prevent that.

In a free-response section where respondents could enter any advice for founders, this theme persisted. A quarter of responses emphasized research, planning, and/or preparation. Only 6% said “just do it” or “go for it.”

We encourage founders to look at Wilbur Labs’ Concept Evaluation — our version of a business plan — which you can view in our post, How to Turn an Idea Into a Business.

Reasons for Startup Failure Over Time

Launching a business is never easy. But do the dominant causes of failure change over time? To find out, we plotted the prevalence of each reason for failure across the last six years.

Although the causes of startup failure changed significantly in a mere six years, challenges with money and financing remained the top reasons for failure. In fact, they have grown more troublesome since 2014, even as venture investment totals break new records annually.

Venture money is not distributed evenly, however. The National Venture Capital Association (NVCA) and PitchBook note that “mega deals” (venture investments of $100M or more) account for a growing proportion of the total — about 45% in 2020, up from 40% in 2019.7,8 Unless VCs are lined up to invest, depending on the next venture round is an ever-riskier survival strategy for startups.

Some causes of failure have grown more prevalent since 2014, including a lack of market need. That doesn’t mean the world is running out of startup ideas (see How to Get Startup Ideas, a Wilbur Labs post addressing this topic in detail). Rather, that may reflect a lack of cultural, geographic, and socioeconomic diversity among founders and investors. The sense of increasing competition may suggest that too many founders have piled into red oceans without enough differentiation. Notice that a lack of market need and mistimed products spiked only in 2020. COVID-19 throttled startups that could not adapt to socially distanced living.

Either way, long gone are the days when founders could launch an app or product and users would swarm to try it. There’s too much noise out there. Solving real problems that serve people better is even more critical now, given the sheer number of products competing daily for attention.

Legal challenges have also been on the rise, perhaps due to increasing regulation of digital companies. Before Europe’s General Data Protection Regulation (GDPR) went into effect in 2018, UK small businesses each spent an average of 600 hours to prepare.9 Early on in a venture, any distraction from building a product and serving customers can be deadly. Encouragingly, fewer founders say their network, scale, team, UX, marketing, or lack of focus are barriers to success compared to six years ago. Maybe startup development is becoming more professional and systematic. Failure to pivot is another barrier in decline. Nearly 30% of startups reported this being a cause for their failure in 2014, but six years later, just under 15% reported the same. Founders willing to pivot tend to raise their odds of success, as the next set of data demonstrates.

In our survey of 150 founders, 55% reported pivoting to avoid failure. Less than half felt confident in their likelihood of success when the pivot took place. Even so, nearly 75% of the founders who pivoted said it was successful.

During a pivot, founders should build the plane as they fly it. The team must learn from mistakes, iterate, and adapt quickly — before the money runs out. Presumably, founders who invest in identifying and mitigating future risks have better odds of not only pivoting but surviving the process.

But which pivots work and why? Which strategies save companies?

A majority of founders pivoted by updating or improving their business plan. As noted earlier, a bad business plan is the third most common cause of failure and is linked to running out of money, the most frequently reported reason for failure.

Few startups launch with a bulletproof, immutable plan. Rather, successful founders create a plan and improve it continuously as market conditions and customer feedback demand. Changing the business plan can lead to the second and third most popular strategies: improving the existing product or launching a new one.

Almost 13% of founders said they attempted to pivot by securing additional funding or investors. This is a rarer pivot but an important one given how commonly startups fail by running out of money or by failing to secure more funding. While capital-intensive businesses (e.g., clean industrial technologies) may depend on external financing for longer than average, most startups can avoid this dicey pivot by focusing on their business model and revenue.

Advice From Other Founders

The odds are stacked against startups. But by studying other founders’ mistakes, aspiring entrepreneurs can anticipate and manage preventable failures. With this in mind, Wilbur Labs asked startup founders to indicate the advice they would give to other entrepreneurs.

The leading suggestions are fundamental rules of startup survival: learn from mistakes, listen to customers, and ensure that there is a market for your product.

Less common but noteworthy is how many founders recommend looking for outside help in the form of legal advice (29%), networking (28%), consultants (28%), and a team with diversified skills (22%).

Despite the stereotype, successful founders are not rugged individualists living off Walden Pond. They surround themselves with experts and mentors who have encountered and solved the challenges endemic to building any startup. Founders who learn from these advisors can focus on their own vision rather than on reinventing the wheel.

Although failure is disappointing, two-thirds of the founders who faced potential failure would be willing to launch another venture.

Having examined why startups fail, how founders pivot, and what they advise in retrospect, what conclusion can we draw for aspiring entrepreneurs?

1. Research, plan, and prepare better. In retrospect, 51.3% of the surveyed founders thought they were adequately prepared when they launched their startup. No wonder so many advised better planning. “Research, research, research. Research your market,” said one founder. To that we offer an addendum: turn all that research into a business plan.

2. Do not leave money to chance. Founders often run out of capital, struggle to generate revenue, spend on the wrong things, and/or fail to attract investors. Businesses are well-equipped to solve big problems because they are (supposed to be) self-sustaining. Revenue from solving problems enables the business to operate long-term without external support. The surest way to avoid financial failure is to develop a business model with a predictable path to revenue and profitability.

Although your solution to a problem may blaze new trails, remember that other founders have taken the same journey of launching a startup. All founders share common challenges. By studying past success and failures, aspiring entrepreneurs can improve their odds of success and avoid missteps that frequently lead to failure. Founders who heed this collective knowledge can reserve their focus for problems unique to their market and product.

Entrepreneurs are made, not born. Hard work, drive, and absolute determination can make up for gaps in skills and experience. The rest is learned by doing, making mistakes, and adapting along the way.

The primary source for this study was a proprietary survey of 156 startup founders from December 2020. 81 founders identified as male and 75 as female. They ranged in age from 22 to 78 and averaged 43.5 years old.

Wilbur Labs administered this survey digitally, utilizing a mix of multiple-choice and open-answer questions. The survey’s main limitation is the reliance on founders self-reporting, which is faced with issues, like attribution, exaggeration, telescoping, and recency bias.

This project also utilizes information gathered from CB Insights and Autopsy. To investigate causes of startup failure, our team analyzed CB Insights’ Startup Failure Post-Mortems list and determined the most common reasons that 368 startups ceased to do business, organizing our findings within several overarching categories (e.g., “ran out of cash”).

We hope the information presented in this study will help startup founders develop successful businesses and protect them from the potential pitfalls we’ve discussed. In this spirit, we invite you to share our work with the entrepreneur ecosystem and other readers who might be interested in our results. Please use our findings and graphics exclusively for noncommercial purposes and provide a link back to this page to attribute our team’s MVPs appropriately.